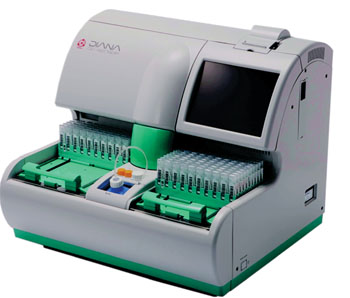 Fecal immunochemical testing requires just a single stool sample to check for the presence of blood, a possible indicator of adenomas or colorectal cancer (CRC) and with an easy collection device, it has been found to increase participation uptake.

In support of Colorectal Cancer Awareness Month (March), United European Gastroenterology (UEG; Vienna, Austria) calls upon all European Union (EU) countries to evaluate advanced screening techniques, such as a simple fecal immunological test, to help increase uptake and survival rates. FIT offers substantial clinical benefits due to its superior analytical technique. The gFOBT method relies on simple oxidation which can be adversely affected by the influence of dietary hemoglobin. However, the FIT technique, such as the OC FIT-CHEK (Polymedco Inc.; Cortlandt Manor, NY, USA), is more sensitive. Specific analysis for hemoglobin detects smaller levels of bleeding and therefore more early cancers as well as more adenomas. The number of false positives is also reduced as there is unlikely to be significant interference from dietary hemoglobin found in feces. If an adverse result is detected, patients are then referred for a colonoscopy.

Rates for colorectal cancer screening programs vary from as little as 15% in areas of Poland and just 22% in Belgium to a healthier rate of 64% in Norway and 70% in Finland. However, uptake generally throughout Europe remains alarmingly low, with the percentage of eligible adults screened in many countries falling way short of the 65% rate considered desirable by the European Commission and already achieved in the USA. Colorectal cancer is treatable when detected early, yet it is estimated to claim the lives of over 500 Europeans every day.

Monique E. van Leerdam, MD, a gastroenterologist from the Netherlands Cancer Institute (Amsterdam, The Netherlands) said, “FIT's simple collection system and enhanced sensitivity offers an attractive alternative to existing gFOBT stool tests as a first-line screening procedure. It will also make it easier for Europeans at risk to get screened and ensure colorectal cancer gets detected as early as possible, enabling thousands to receive successful treatment.”