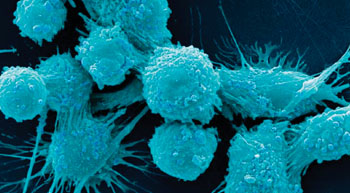 A blood test that measures the number of cells shed from prostate tumors into the bloodstream can act as an early warning sign that treatment is not working.

The enumeration of circulating tumor cell (CTCs) in the blood has been evaluated as a surrogate outcome measure which would predict which men were benefitting least from a prostate cancer drug after as little as 12 weeks of treatment.

Led by oncologists at the Memorial Sloan Kettering Cancer Center (New York, NY, USA) an international team of scientists examined CTCs alone and in combination with other biomarkers as a surrogate for overall survival was a secondary objective of a multinational, randomized, double-blind phase III trial of abiraterone acetate plus prednisone versus prednisone alone in patients with metastatic castration-resistant prostate cancer (CRPC) previously treated with docetaxel. The study involved the detailed analysis of blood samples from 711 men who were enrolled in the drug trial.

The team measured numbers of circulating tumor cells at four-week periods after the start of treatment with the drug, along with a range of other biomarker molecules in the blood including lactate dehydrogenase (LDH), high levels of which are a sign of general tissue damage. The trial itself had used the standard trial end points of average overall survival and survival free of cancer progression to show abiraterone's effectiveness in late-stage prostate cancer, but the scientists were able to cross-reference those results with data on circulating tumor cells and LDH levels in each man taking part.

The team found a correlation between those men who had responded least well to treatment with abiraterone, and higher levels of cancer cells and LDH in the bloodstream, measured 12 weeks after starting treatment. They showed that levels of circulating tumor cells varied independently of a range of other biomarkers. Overall, two year survival of patients with CTCs less than 5/7.5 mL (low risk) versus patients with CTCs equal to or greater than 5/7.5 mL of blood and LDH greater than 250 U/L (high risk) at 12 weeks was 46% and 2%, respectively.

Paul Workman, PhD, FMedSci, DSc, a Professor and Chief Executive of The Institute of Cancer Research (London, UK), said, “Using a blood test to assess whether a cancer drug is working would be much easier and more convenient than other methods of monitoring treatment, and might pick up signs that a tumor is not responding weeks or months earlier than is achievable now. It could give doctors a valuable early warning that treatment is not working, and an opportunity to switch the patient promptly to an alternative drug.” The study was published on March 23, 2015, in the Journal of Clinical Oncology.

Cytopathology on ultrasound-guided fine needle aspiration biopsies has dramatically improved the clinical management of patients with solid thyroid nodules that are greater than one centimeter. Molecular testing for oncogenic mutations or gene expression in fine-needle aspirations […]