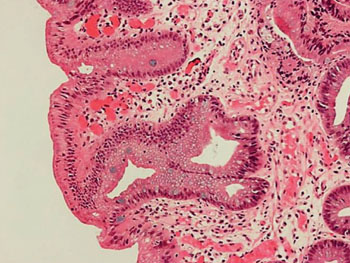 A molecular diagnostic test has been developed for predicting risk of progression from Barrett's esophagus to esophageal cancer approximately three to four years before the cancer progresses.

Barrett's esophagus (BE) is a condition that occurs when tissue lining the esophagus is replaced by tissue similar to the intestinal lining and it is associated with an increased risk of developing esophageal cancer.

Scientists at the University of North Carolina (Chapel Hill, NC, USA) and their colleagues conducted a case-control study to measure genetic instability, assessed by the mutational load (ML), in pre-progression BE tissue as a marker to predict progression to high-grade dysplasia (HGD) or esophageal adenocarcinoma (EAC). Patients with BE were from three sites. Cases were BE patients with no dysplasia or low-grade dysplasia (LGD) at baseline, and who had HGD or EAC on a follow-up biopsy done at least one year later. Controls were matched 2:1, and had non-dysplastic BE or LGD at baseline and no progression of BE at follow-up. Formalin-fixed, paraffin-embedded tissue was micro-dissected for epithelium.

The presence of loss of heterozygosity (LOH) and microsatellite instability (MSI) was investigated using polymerase chain reaction and quantitative capillary electrophoresis of DNA extracted from each micro-dissected target. Of the 69 patients, there were 46 non-progressors and 23 progressors. The groups were similar in age, follow-up time, and mean number of micro-dissected targets. Both groups had a similar proportion of nondysplastic and LGD histology at index biopsy. The mean per-patient ML in the pre-progression biopsies was significantly higher in progressors compared to non-progressors. The BarreGen molecular test (Interpace Diagnostics; Parsippany, NJ, USA) had an overall accuracy of 95% in identifying patients who progressed to cancer from those who did not progress to cancer.

The authors concluded that the mutational load in pre-progression tissue of BE patients with no dysplasia or LGD, predicts progression to HGD or EAC. ML may have utility as a clinical biomarker in endoscopic surveillance of BE patients to predict progression to HGD and EAC approximately three to four years prior to the histological onset of HGD and EAC. The study was presented at Digestive Disease Week (DDW) held May 16–19, 2015, in Washington DC (USA).

Cytopathology on ultrasound-guided fine needle aspiration biopsies has dramatically improved the clinical management of patients with solid thyroid nodules that are greater than one centimeter. Molecular testing for oncogenic mutations or gene expression in fine-needle aspirations […]