Lung cancer can be diagnosed early with regular low-dose computed tomography (CT) scans of people at risk, but these tests are very expensive, and also involve exposing patients to X-ray radiation.Patients are often diagnosed with lung cancer only when their disease is already at an advanced stage and hard to treat, so medical professionals are trying to change that, by identifying biomarkers that could be the basis of early tests for lung cancer.Scientists at the West Coast Metabolomics Center (Davis, CA, USA) analyzed blood samples collected from people who developed the disease, months or years before they were diagnosed. They were able to access samples stored from the Beta-Carotene and Retinol Efficacy Trial (CARET) clinical trial. A liquid chromatography/mass spectrometry hydrophilic interaction method designed to profile a wide range of metabolites was applied to pre-diagnostic serum samples from CARET participants who were current or former heavy smokers, consisting of 100 patients who subsequently developed non-small-cell lung cancer (NSCLC) and 199 matched controls. 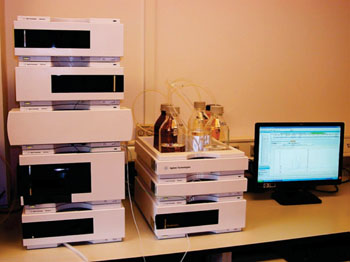 The team used the Agilent 1200 high-performance liquid chromatography system and the Agilent quadrupole time-of-flight (QTOF) 6530 mass spectrometer (Agilent Technologies; Santa Clara, CA, USA) with a JetStream ion source. A separate serum aliquot was used to quantify levels of pro-surfactant protein B (pro-SFTPB), a previously established protein biomarker for NSCLC. A blinded validation of a metabolite, identified as N1,N12-diacetylspermine (DAS), and pro-SFTPB was performed using an independent set of CARET pre-diagnostic sera from 108 patients with NSCLC and 216 matched controls. Serum DAS was elevated by 1.9-fold, demonstrating significant specificity and sensitivity in the discovery set for samples collected up to six months before diagnosis of NSCLC. In addition, DAS significantly complemented performance of pro-SFTPB in both the discovery and validations sets.Oliver Fiehn, PhD, a professor of molecular and cellular biology, and senior author of the study, said, “Early diagnosis is the key to fighting lung cancer. Individually, the markers diacetylspermine and pro-surfactant protein B were about 70% predictive, but in combination, that rose to 80%. In other words, eight out of ten people with early-stage cancer would be correctly identified by the combined test.” The study was published on August 17, 2015, in theJournal of Clinical Oncology.