Acute myeloid leukemia (AML) is a heterogeneous disease with respect to prognosis and early response assessment has an established role as predictor of remission rate, and overall and disease-free survival.Among the large number of prognostic factors for AML, karyotype is one of the best predictors of remission rates and survival and it has been incorporated in a number of risk stratification models. Even after this risk assignment based on cytogenetics, the prognosis of individual patient remains largely unknown as some patients in the high-risk category do well, while the opposite is true for others. 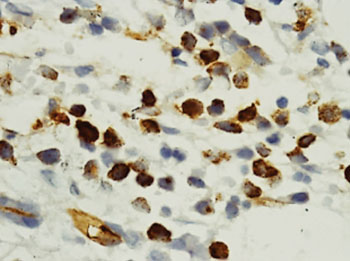 Hematologists at the All India Institute of Medical Sciences (New Delhi, India) conducted an observational, prospective, and retrospective study of a total of 100 cases of AML who received induction therapy and had a Day+14 and Day+28 bone marrow aspiration and biopsy were included in the study. Only those cases which had hematopoietic progenitor cell antigen CD34 positive blasts in flow cytometry at initial diagnosis were included. Immunohistochemistry was performed to enumerate blasts using the antibody against CD34 on Day+14 bone marrow trephine biopsy. The determination of the blast percentage on CD34 stained Day+14 bone marrow biopsy (BMB) sections was performed manually. For this, five representative fields were selected and CD34 positive cells were counted under the oil immersion lens (× 1000). The pattern of CD34 positivity was a granular brown cytoplasmic and membranous staining. The blast percentage on D+14 bone marrow aspirate (BMA) was compared with the blast count obtained on the CD34 immunostained same day marrow biopsy sections.CD34 immunohistochemistry (IHC) performed on D+14 BMB showed brown granular cytoplasmic staining in blasts which was clearly distinguishable from the normal hematopoietic cells, lymphocytes, and other negative cells in the background. On CD34 IHC, 67 cases had a blast count of equal to or less than 5%, 22 cases with a count of greater than 5% to 20%, and 11 cases with a count greater than 20%. On BMA, 82/100 patients were staged as good responders, CD34 IHC assessment confirmed 67 out if these 82 as good responders, but reassigned 15 of them into intermediate and poor responders.The authors concluded that early response assessment plays an important role in management of acute myeloid leukemia. In patients with CD34-positive blasts, the CD34 IHC can improve the detection of residual blasts on Day 14 bone marrow biopsies in comparison with morphological assessment of blast percentage in bone marrow aspirates. The study was published online on August 6, 2015, in the International Journal of Laboratory Hematology.