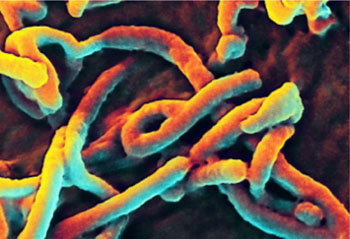 Lack of laboratory diagnostic capacity has led to diagnostic delays in the current West African EVD outbreak of 2014 and 2015, compromising outbreak control, with an estimated 24,701 cases and over 10,000 deaths.

Scientists at King's College London (UK) and their international colleagues evaluate the diagnostic accuracy of an EVD rapid diagnostic test (RDT) compared with the gold standard Ebola virus (EBOV) RT-PCR in an operational setting for EVD diagnosis of suspected EVD cases admitted to Ebola holding units (EHUs) in the Western Area of Sierra Leone. A total of 138 participants were enrolled and recruited consecutively at study sites, from January 22 to February 16, 2015.

The Defence Science and Technology Laboratory (DSTL; Porton Down, UK) have developed a rapid antigen diagnostic test (RDT) for EVD diagnosis. The DSTL EVD RDT is a bedside lateral flow assay using capillary blood rather than venous blood to detect presence of an undisclosed Ebolavirus antigen. The test can be conducted and interpreted with minimal training and the result is obtained within 20 minutes. A semi-quantitative result is obtained by scoring a test line on color intensity. The EVD RT-PCR testing was performed on venipuncture blood samples with the Altona RealStar Filovirus screen kit for RT-PCR (Altona Diagnostics; Hamburg, Germany).

Fifteen of 131 patients tested positive for EVD by EVD RT-PCR, giving a study EVD prevalence of 11.5%. All EVD cases were identified by a positive RDT with a test line score of six or more, giving a sensitivity of 100% and the corresponding specificity was high at 96.6%. The positive and negative predictive values for the population prevalence were 79.0% and 100%, respectively. The authors concluded that the DSTL EVD RDT is highly sensitive, specific and performs well in an operational setting. A high sensitivity is critical to EVD diagnostic test acceptability.

A highly sensitive screening test such as this would allow high-risk suspected EVD cases to be prioritized for isolation and confirmatory diagnostic testing with RT-PCR, reducing non-EVD admissions in EHUs. If the sensitivity was lower, EVD-positive cases could be inappropriately discharged to inpatient wards, with risks of onward nosocomial transmission. This RDT could be used as a “rule-out” screening test for EVD to improve rapid case identification and resource allocation. The study was published on March 16, 2015, in the journal Eurosurveillance.