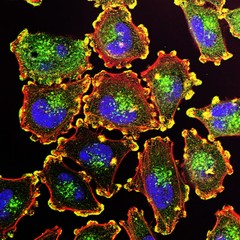 The ability of cancer cells to move and spread depends on actin-rich core structures such as the podosomes (yellow) shown here in melanoma cells. Cell nuclei (blue), actin (red), and an actin regulator (green) are also shown.

This image was originally submitted as part of the 2015 NCI Cancer Close Up project and selected for exhibit.